Please check out Hexadecimal Chart to see what codes are available to name.
The hexadecimal code that matches this color is FF7F50

This article will be judged by what is written as a justification and may be deleted or rewritten if the justification does not adhere to the Color Sorting Policies.
This color was named for a blend of several colors found in a typical coral reef.
This color is a shade of Orange
The color Coral is named after an Animal 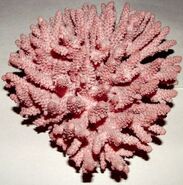 Add a photo to this gallery

Coral is technically an animal. Many people are often confused about this because coral doesn't move much. In truth, what a person sees as one coral is really a colony of tiny animals like bees in a beehive or termites in a mound. They don't leave the colony. They lure food into the colony and then like jellyfish, they sting their prey and devour it.

Retrieved from "https://color.fandom.com/wiki/Coral?oldid=10001"
Community content is available under CC-BY-SA unless otherwise noted.